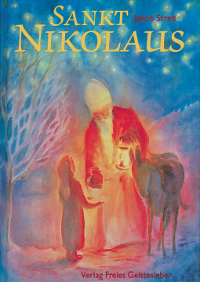 Searching the Rudolf Steiner-archive I couldn’t find anything interesting from Steiner himself about Saint Nicholas (or Nikolaus, in German). But since today is Saint Nicholas day, I wanted to do something about this topic anyway.  (A side note: this day is not observed in Sweden; unlike in English, not even our name for Santa Claus bears any resemblance to St Nicholas!) However, I found something interesting on the website of an anthroposophical publisher in Germany (where St Nicholas day is celebrated). It’s a children’s book about St Nicholas, written by Jakob Streit. It comes with a caution: that St Nicholas day risks losing its ‘real meaning’! But we also learn that St Nicholas constitutes the ‘human’ starting point (can’t find a better word) ‘for a spiritually active Christmas’:

But this is not all for today, because today is the 6th of december. This means it’s also Finland’s independence day. You may perhaps erroneously conclude Steiner can’t have said much about Finland, but in that case you’re wrong. What he said, though, was radically different from anything one might have heard about Finland from other sources (such as, in my case, relatives). In this lecture — aptly called ‘Concerning the Origin and Nature of the Finnish Nation’ — Steiner speaks about the national Kalevala epic (sometimes read in waldorf schools also outside the Nordic countries, I think?), folk souls and explains why Finland still exists as a nation (though when he this lecture took place, Finland was not yet an independent nation).

The “Kalevala” expresses in a deep way that the greatness of the Finnish nation is based on the fact that it really prepares the “one-ness”, or the unity within the triad; by obliterating the soul’s threefold character it prepares the acceptance of that unity which is no longer a purely human unity, but a divine one, in which dwells the godly hero of the Mystery of Golgotha. […]

I explained to you [he’s talking about another lecture /a] that the men belonging to the once great Finnish nation (the present one is only a remnant of the formerly great and widely spread nation) had souls that possessed, in addition to a certain ancient form of clairvoyance, in their immediate daytime experience, something like a scission of the soul into sentient soul, understanding soul and consciousness-soul.

I told you that in the magnificent epic poem “Kalevala” the three characters Wainamoinen, Ilmarinen and Lemminkainen express how this threefold soul is structured and guided from out the cosmos.

How could such a thing take place? How was it possible that a great nation could develop at a certain place in Europe, a nation whose soul was of the kind described to you? […]

When something that lies below the Ego-nature rays into a nation such as the old Finnish nation, something more spiritual than the Ego-nature and more strongly connected with the divine forces, (for, if the soul feels itself split into three, it is more strongly connected with the divine powers than if this is not the case) then not only the earthly element, with its elemental spirits, can, in a certain way, ray into man’s earthly part from below, but something else must ray into this earthly element, another elemental influence must ray into it.

There are a few things here that might have surprised my grandparents if they had known about it.

(The book cover picture has been borrowed from the publisher — Verlag Urachhaus — source here.)