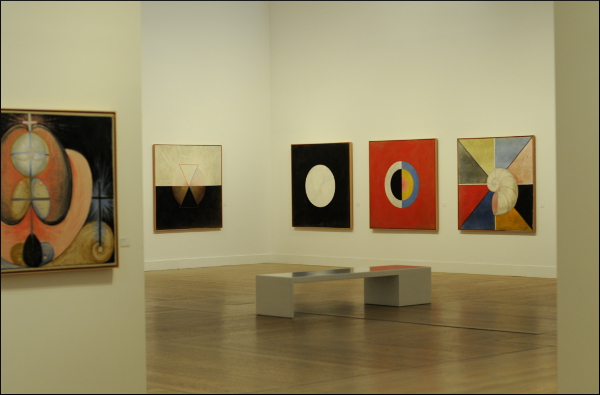 If you happen to be in Stockholm this spring, the Hilma af Klint exhibition is worth visiting.* It runs until May 26 at Moderna Museet. She’s obviously an immensely fascinating person, but even I (who was already fascinated) was quite surprised at how impressive her works are, when I viewed them at the museum early this morning. I had seen only a few of them before, in real life, and many of them in print — it turns out, the latter is a very different thing from seeing them in reality, which perhaps hardly needs pointing out, but I felt it particularly true this time. Much of her abstract art is stunning, both the shapes and the colours are amazing in themselves, but her interests and inspirations in occultism and spiritual ideas and movements add an extra layer of fascination (although deciphering the occult meaning of it is quite a task! as it has to be). Her early works were lovely too — I particularly liked the paintings of flowers and plants, which are beautiful although not at all spectacular in the same way. In her later works — succeeding these now famous abstract paintings which were the main focus of the exhibition and of interest in general — the inspiration from anthroposophy and anthroposophical artistic ideals is evident; there’s actually stuff looking more or less like any wet-on-wet painting, indistinguishable from the children’s paintings you typically find pinned on the walls of any waldorf school (especially the early grades… to make matters worse). There’s a nice exhibition catalogue which includes an interview with Helmut Zander, whom many of the anthroposophically interested are familiar with already. (For looking at her artwork, I — obviously — recommend that you get the catalogue. My images don’t do it justice at all.) 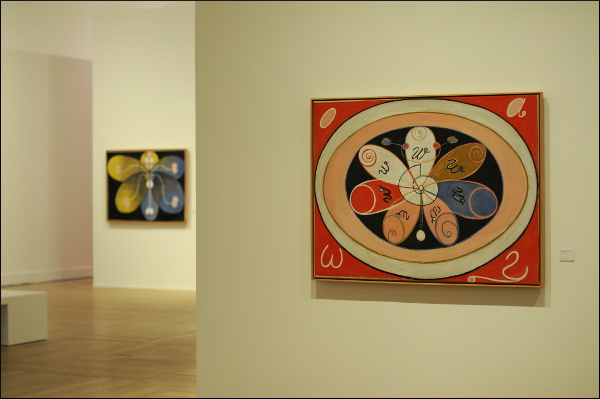 Painting (the red one) which af Klint supposedly showed to Rudolf Steiner, when he came to her studio during his visit to Stockholm in 1908. (She herself went to the Goetheanum, and also wrote to Steiner to ask him for advice on what to do with her art. She hoped that Steiner, and the anthroposophists, would be interested.) 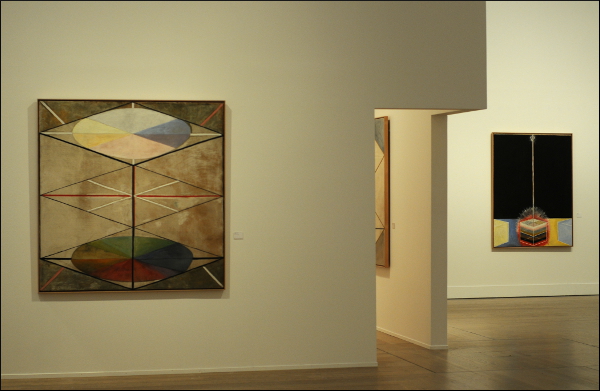 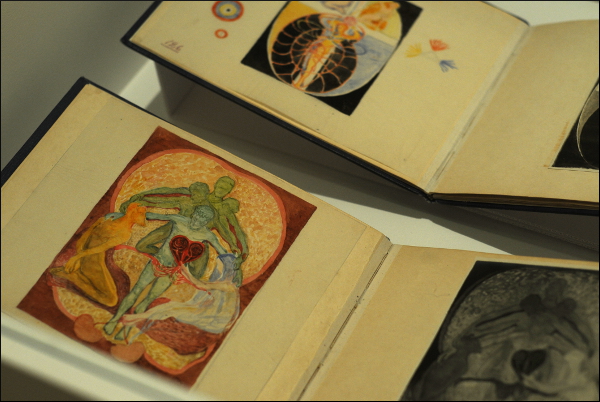 Notebooks, preprations for paintings. (She also kept notebooks in which she wrote extensively about her work and her paintings.) 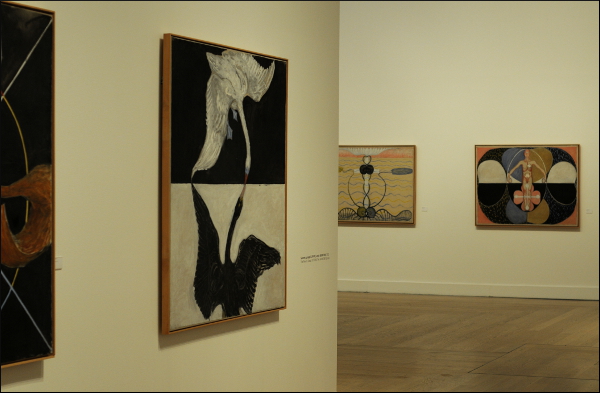 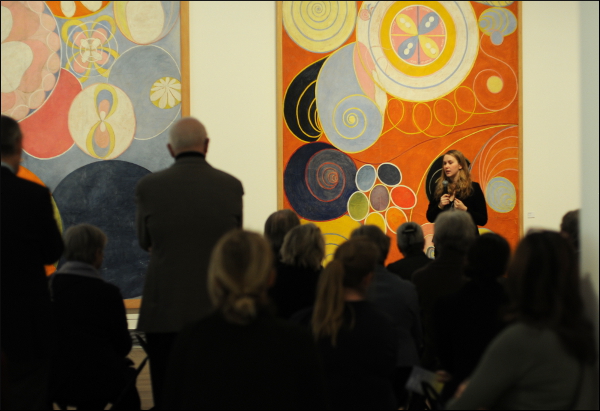 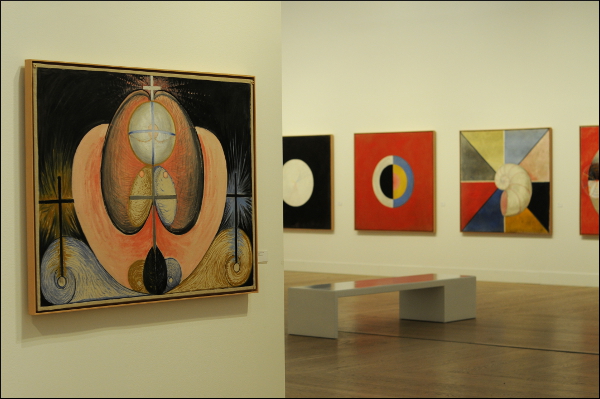 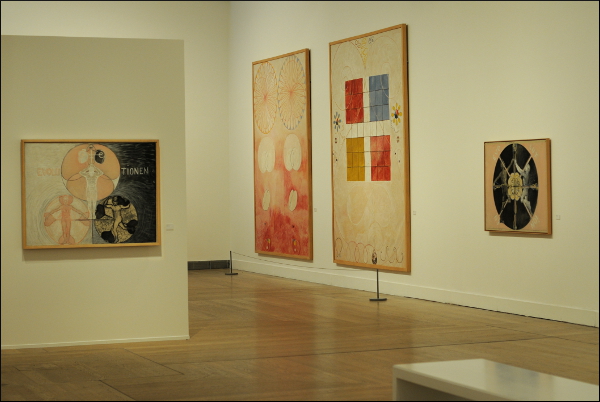 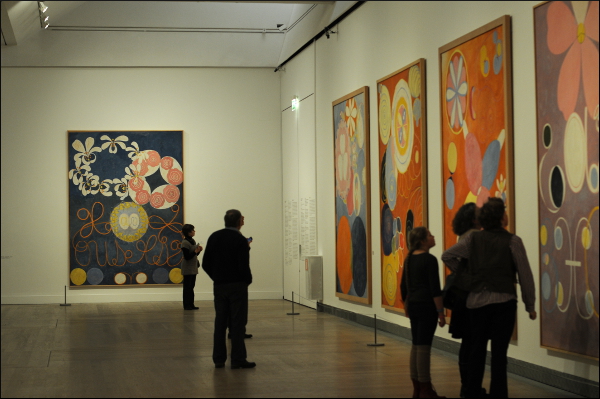 There are ten very large paintings, appropriately named The Ten Largest. They’re supposed to symbolize life. The blue and the lighter blue ones (with more orange elements) are childhood, the orange ones youth, maube or purple (there are four) adulthood, and on the picture just before this one you see the two last in the series, with paler backgrounds, representing the later stages of life. This idea fits fairly well in the scheme of the 7-year life cycles known from theosophy (and anthroposophy). 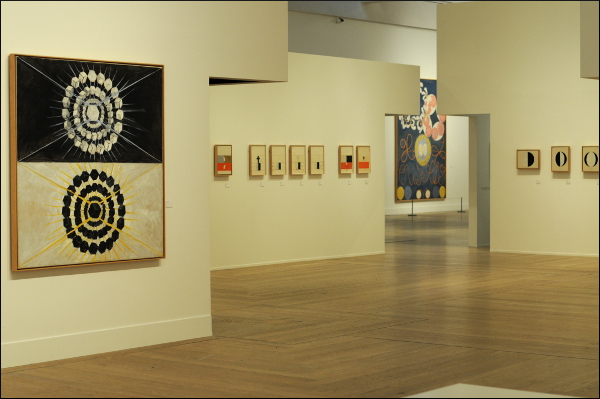 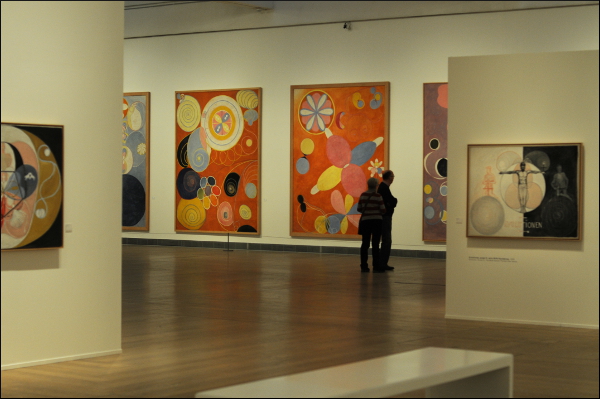 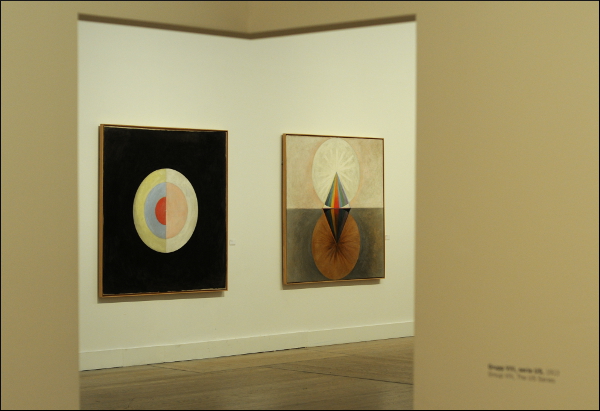 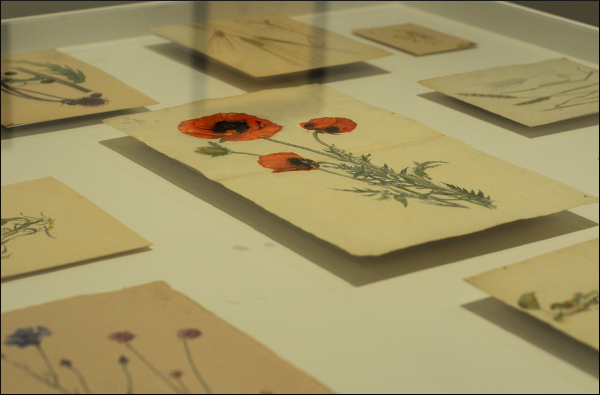 (Sorry about the ugly reflection; it certainly doesn’t help. I thought it was worth showing one of her early flower studies I mentioned above, and unfortunately had no better image.) 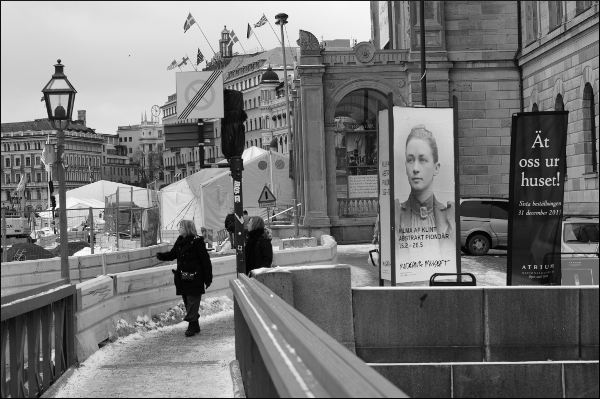 Hilma af Klint ad. (That’s her. On the advertisement pillar. She looks so rational, and almost stern.)

*I mentioned it, and her, a while ago. I also recently wrote  (in Swedish) about a couple of books about her. There has been some media coverage lately. Frankfurter Allgemeine Zeitung has a whole page dedicated to the exhibition today (February, 20), but sadly it’s not online. Other articles you might want to look at include these, most of them are in Swedish, but if I find anything interesting I will add it later: SvD, Expressen, Kunstkritikk, Fokus, ArtDaily.

6 thoughts on “hilma af klint: a pioneer of abstraction (exhibition)”