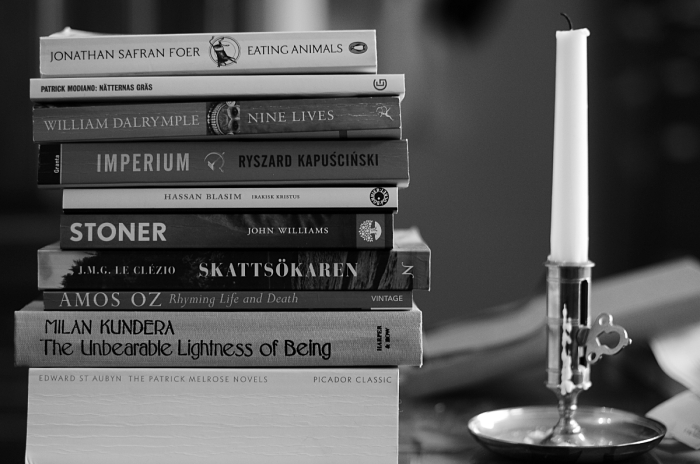 Not much happiness will come out of summarizing 2016, but I will write a little about a few of the books I read (below). Mr Dog died, which eclipsed everything else. A bipedal friend died before that; bad enough, and it’s strange how you can miss someone you never met in real life. Much was quite depressing before mr Dog’s death, on that awful November day. Sometime during summer I lost my capacity for fake smiles, the last mechanism of survival among the human species. Without it, you’re fucked. I was always quite good at it (surprising, perhaps, but as I’ve said, my personality is mostly a sham, which explains it). I’d lost my ability to write; now I struggle with it. I find it hard even to tell inane jokes, the last resort of a feeble-minded depressive. Of course, mr Dog isn’t coming back. This night I dreamt that he and I were on a train to London, but got off at the wrong station, ending up in boring nowhere — oddly, it was possibly the last train, all the other trains were going elsewhere, we asked around, nobody really knew if one could get to London at all, it was terribly complicated. Not that it mattered, because at least we were together. We could have started a new life there; it would have been alright. Another night I dreamt I had two dogs, one of them died; I was so relieved it was the other one, not mr Dog.

I read books in 2016. I read 99 books, which, when I was through counting, was quite disappointing. I don’t think I’ve been in the three figure range ever before, so missing by one was a bit annoying for the competitive side of me, weak as it is. 27 were Steiner related, and I’ve excluded them categorically and on principle (though I don’t know which principle) from the list of favourite books. From the remaining ones, I’ve chosen ten — seen in the photo. Michel Houllebecq’s sinister novel Submission almost made it, cleverly written as it is (as all his books are, I should say), as did Paul Auster’s Timbuktu (but I read it in Swedish, and I strongly suspect that the translation lacked a bit of poetry) and a book, in Swedish, by Lena Einhorn about Jesus (indeed — and it reads like a thriller). I have to limit myself. So I’ll just mention these books in passing. There’s one book I should have finished, but didn’t: Faust. I’ll have to do it this year.

My absolute favourite: the dark and satirical autobiographical novels (five — yes, I’m cheating, one of the books on my list is actually five books…) by Edward St Aubyn, who is such a skilled writer that I’m constantly in awe when reading him. I had read one of the novels in this series before, and one of his other novels, too, so I knew what I was getting into, but it surpassed all my expectations. Patrick Melrose, a man with a rage against life itself, struggles for self-knowledge, for the ability to live with and transform the consequences his own past, for coming to terms with the loss of his childhood home in France, which is simultaneously the place of trauma and — through magical thinking, through the capacity of the mind to escape physical reality — the release from it. His wealthy mother, constantly busy saving the world while neglecting the child — an unlucky result of her marriage to his brutal, violent father — donates the large French estate to a spiritual foundation led by an Irish guru, a narcissistic crook with a following of believers, some of them idiots, some of them endearing, as the case usually is. A black sense of humour is often the best self-defence, and the books are truly hilarious, but eventually Patrick succeeds in breaking down his own armour — there is, at the end, with the loss of the estate and with it the hope of release through fantasy and magic, a transformation; he abandons his old strategies, the drugs, the general destructiveness and the flight into detached sarcasm.

I buy most my books in thrift stores, so it’s more or less random what I read nowadays. If I find anything by William Dalrymple or Ryszard Kapuscinski (I have to fight with my computer to write Norwegian letters, I’m not going to try Polish…), I always buy it. Both their books on my list include some marvellous, poetic writing from their travels in India and the former Soviet empire. Why Jonathan Safran Foer’s book deserves a place on the list, I do not know — perhaps because it was an eye-opener even for someone who doesn’t eat meat (it made me feel much less inclined to eat fish, which I occasionally did before). He is a quite decent writer as well.

The Iraqi Christ is a collection of short stories written by Hasan Blasim — an Iraqi immigrant in Finland (of all places!). I was, to put it succinctly, amazed. It’s a book full of brutal realism and — magic. It’s sort of dreamy and quite horrible, at the same time. There’s one short story that includes dogs — in fact, is supposedly told by one, a keen observer (as all dogs are) of human folly. Available in English translation as well as in Swedish. There are several good reviews in English, for example this one.

Then to the Frenchmen, with their air of mysticism… I read four books by Modiano in 2016, and had to choose one — it’s hard, because, in a sense, he seems to write the same book over and over. There’s the search for something hidden or lost. It is, indeed, mystical. Even more so is Le Clézio’s novel The Prospector. In fact, if I hadn’t tried (half-heartedly) to research this but came up with nothing, I’d say, dead certain, that it must be inspired by some esoteric worldview or other; at least by the kind of atmosphere (sorry) that serves as a foundation of such worldviews; or, if not that, at least it speaks to the same needs, to the same drive to discover hidden knowledge of a certain kind. But, no, I came up with nothing.

If one is so inclined, one could use Kundera’s novel to elaborate on the old topic of karma and the threads of karma that bind human lives together (as I said, if one is so inclined…). He’s nothing short of a genial writer, and to make matters better (or in this case possibly worse) there’s a dog (who dies). A classic, obviously, and a great book I perhaps should have read long before — but I’m not sure I would have appreciated it ten years ago. In fact, I’m pretty sure I wouldn’t have.